VMware VMware Aria Automation is a product suite comprising three products, Cloud Assembly, Service Broker and Code Stream. These and other products are available ‘as a Service’ via the VMware Cloud Services Portal.

Most of the API documentation is centred around a user making call using API tokens. API tokens are issued by users in an organization and are associated with the user’s account.

The first step of a programatic flow is to pass the API token details to the Authorization Server. A Bearer Token is returned it is not intended to have any meaning to clients using it. The name “Bearer authentication” can be understood as “give access to the bearer of this token.” The Bearer Token is used in subsequent calls to the REST API.

A common usecase is for servers and application services to make programmatic calls to REST APIs. If user aligned API tokens this can cause account lifecycle management headaches. VMware Cloud Services supports OAuth2 apps, the owner of the OAuth app is the organization in which it is created. These credentials can be managed by user assigned the organization owner or developer roles.

Some requirements will drive tightly coupled interactions and the building of client web or native applications. More typically cross product infrastructure managements tasks are loosely coupled. OAuth2 Server to server app tokens are useful for these loosely coupled integrations. The programatic flow for these is very similar to that of the API token. The first step is to pass the OAuth2 API ID and APP Secret to the Authorization Server. A Bearer Token is returned which can be used in subsequent calls to the REST API.

To create a OAuth2 Server to server app you must connect to the VMware Cloud Services Portal with user account with sufficient priviliges.

Navigate to Organization and then OAuth Apps and follow the Create App wizard. 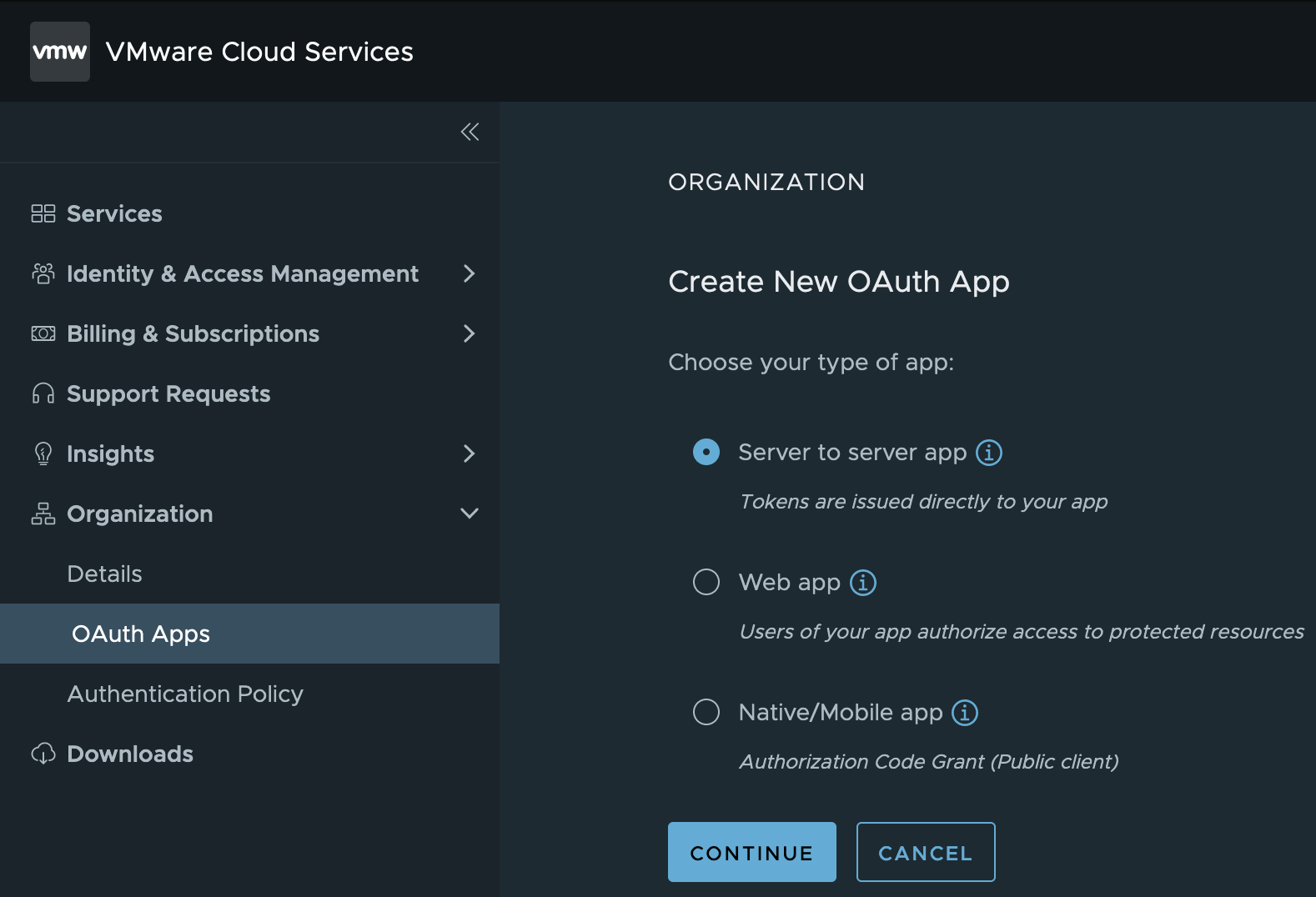 Add any Organization Role memberships which offer the right priviliges to the application calling the API. 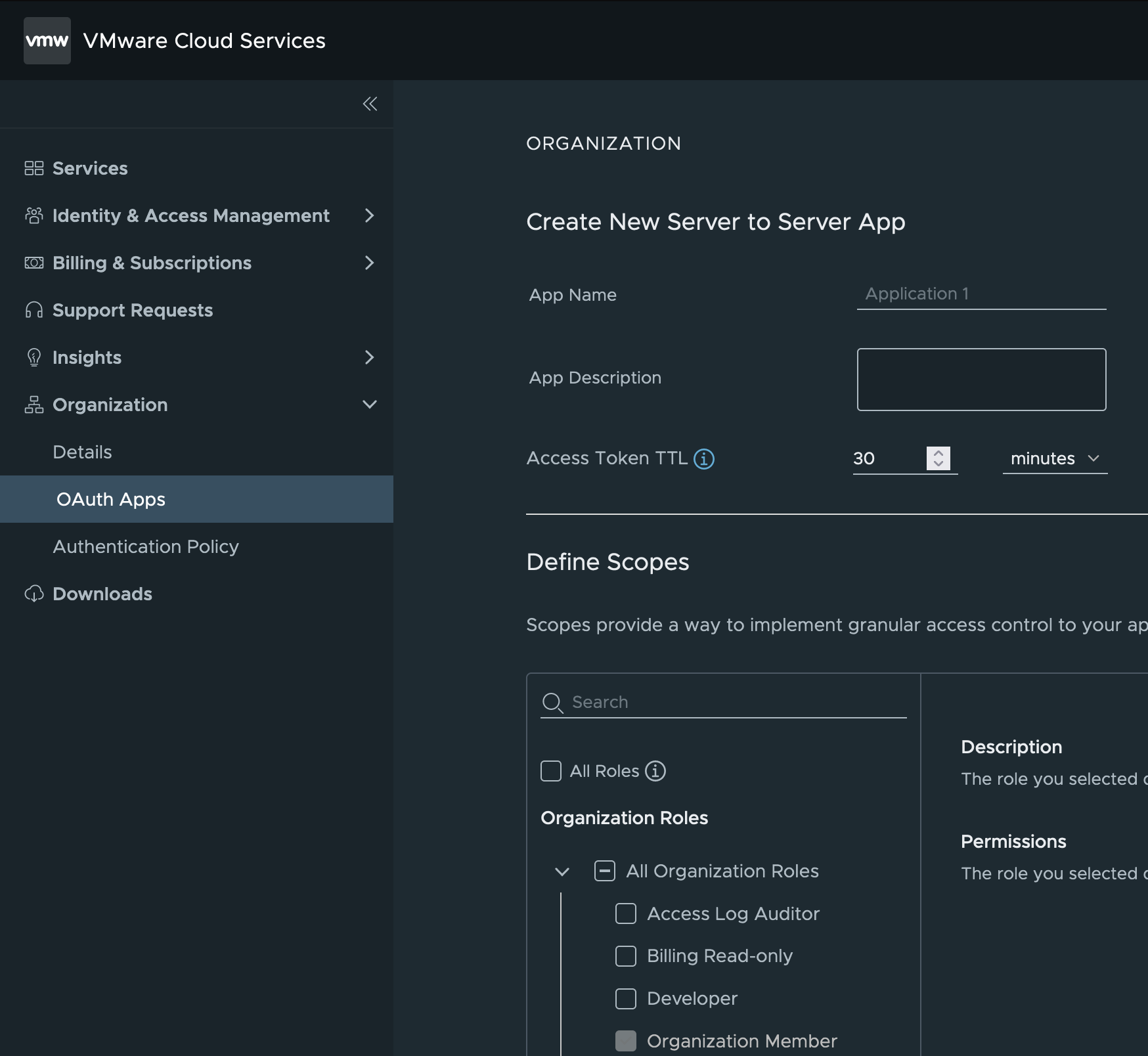 Add any Service Role memberships which offer the right priviliges to the application calling the API. 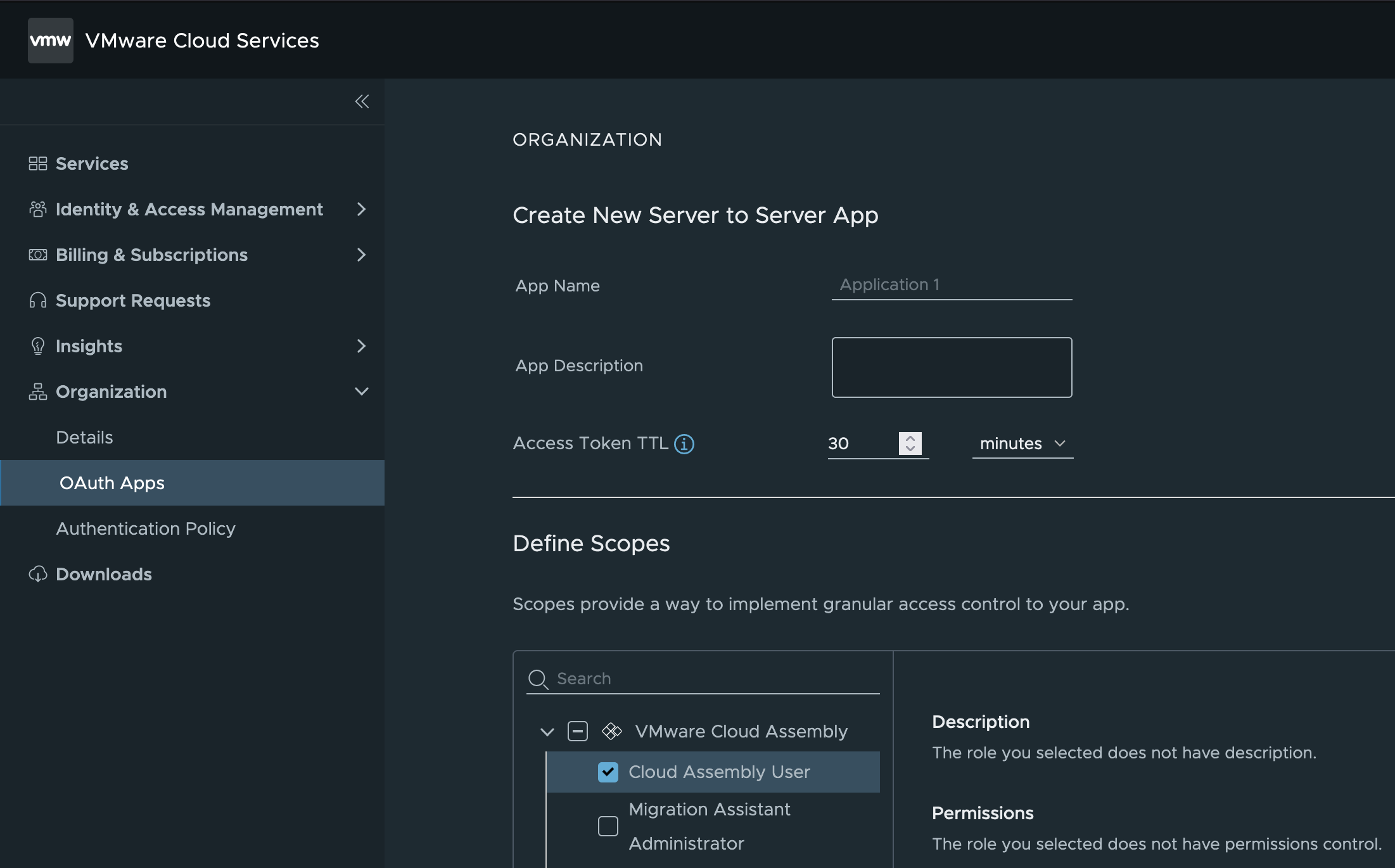 The creation wizard will output an Application ID and a Application Secret, store these securely.

In this test of functionality I am using a simple REST client. The Application ID and a Application Secret need to be securely stored. To similuate secret management solution I store these as environment variables along with the URL of the VMware Cloud Services API.

The Authorization Server also requires a POST body to body in ‘x-www-form-unicode’ where a key value pair is passed. The key needs to set to ‘grant_type’ and the value set to ‘client_credentials’.

When POST is made if Application ID and a Application Secret are accepted by the API a Bearer token is returned in the response.